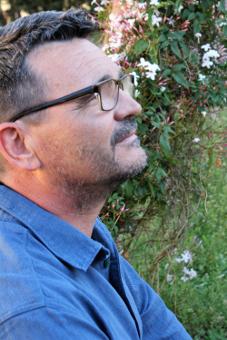 Àngel Martí Callau was born in July 1966, into a seafaring family from Ametlla de Mar, a fact that has marked his work. He has a Higher Diploma in Criminology, a Master’s Degree in Public and Private Security, and is a qualified expert in Public Safety and Emergency Management. He is employed by the Ametlla de Mar Council and combines this work with his passion for writing.

Although he began to write—and poetry in particular—when he was very young, it was not until 2012 when his first work was published and, oddly enough, this was a novel. Thereafter, he joined the Ebre Poets Association and, subsequently, the associations Poems al Vent and Calaculture. He presently belongs to the group DiLLUMS d’Arts al Forn.

He writes novels, stories, and especially poetry, the latter intimate in tone with an emphasis on disenchantment in love and speaking out for his beliefs. His work has been awarded several literary prizes.

With R. González, he now directs and presents “L’Absenta”, a weekly cultural programme of La Cala RTV, as well as writing lyrics for musical groups and working with Enric Franch in the poetic-musical duo “Versus A Cors”. He regularly appears in poetry recitals, especially in solidary events, and also takes part in encounters of poets around the country. Since 2014 he has been one of the organisers of the Ametlla de Mar Literary Award, the Ametlla de Mar Street Poetry Night Literary Prize, and the Calaculture Literary Appetisers, as well as working as a cultural activist.

He is a member of the Associació d’Escriptors en Llengua Catalana (AELC – Association of Catalan Language Writers).