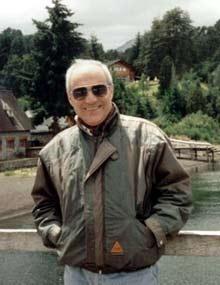 Jordi Arbonès i Montull (Barcelona, 1929 – Buenos Aires, Oct. 6, 2001) wrote essays, poetry, theater and narrative prose, but above all he dedicated his life’s work to the task of translation. It is unlikely for a Catalan not to have read something translated by him, as the list of books that he worked on is, if nothing else, remarkable for its length.

In 1956 he moved to Argentina where he worked tirelessly, as much at translation as with theater direction for the stage of the Casal de Catalunya de Buenos Aires. In 1966 he founded the Obra Cultura Catalana. He also worked for a number of publishing houses, including Poseidón and Marymar.

He won the golden rose for his poetry in the Jocs Florals (Floral Games, a poetry contest after the competitions held by Medieval troubadours) in Caracas, Venezuela, in 1966. One would also have to note his important essay Teatre català de postguerra (Post-Civil War Catalan Theater – 1973), and others such as Salvat Papasseit, l’home i el poeta (Salvat Papasseit, the Man and the Poet – 1966) and Pedrolo contra els límits (Pedrolo: To the Limits – 1980). The Autonomous University of Barcelona has recently created the Jordi Arbonès Chair in Translation.