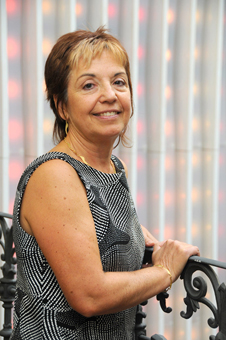 Margarida Aritzeta (Valls, Alt Camp, 1953) completed her teacher training studies in Tarragona after which she studied Modern and Contemporary History and Catalan Philology at the University of Barcelona, where she obtained a PhD with a thesis on the poet and critic Josep Lleonart. From 1970 to 1973 she studied Fine Arts at the Sant Jordi School of Fine Arts in Barcelona but eventually opted for a literary career. Her first published work was the essay Carrasclet-Veciana (1979). In 1980, she was awarded the Víctor Català Prize for the Short Story for her book Quan la pedra es torna fang a les mans (When Stone Turns to Mud in Your Hands), and then the Sant Joan (Saint John) Prize for the Novel for her work Un febrer a la Pell (A February in Your Skin). Since then she has published a considerable number of books, in particular novels, some of which are for children and young people. In 2013 she received the children and young people Prize Barcanova for her novel El vol de la papallona. At the same time she is well known for her crime novels and science fiction.

From 1979 to 1992 she worked as a lecturer at the Tarragona Teacher Training School and, since 1992, she has been a staff member of the Arts Faculty at the Rovira i Virgili University, where she teaches Literary Theory. Working at the university has enabled her to publish numerous research works, studies on literature and critical editions, notable among the latter projects being editing part of the Baron of Maldà's fifty-two volume diary Calaix de Sastre (Odds and Ends).

From 2006 to 2010 she was director general of the Departmental Action section of the Generalitat (Government) of Catalonia.

She has taken part in a great number of debates, panel discussions and conferences as well as being a jury member for literary prizes. She has organised postgraduate and master's degree courses on literature, literary writing and screenplays.

She is a member of the Associació d'Escriptors en Llengua Catalana (Association of Catalan Language Writers).