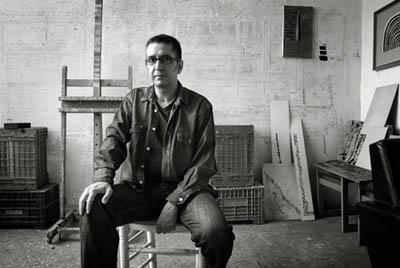 Manuel Baixauli (Sueca, 1963) is a painter and writer. Inclined towards the arts since his adolescent years, Baixauli studied painting in the Fine Arts Faculty at the Valencia University. After making a name as a painter and receiving several prizes for his work, he embarked on a course that has led him to engage in a constant repainting of his pictures. In 1990 he started to teach at the Escultor Beltran Art School, in Sueca. ?

It was not until he was thirty years old that Manuel Baixauli started to write. His first published work was the collection of stories called Espiral (Spiral – winner of the 1998 City of Badalona Prize). This volume of short stories and micro-stories draws attention to a tiny elite that remains unnoticed by the general public.

Four years later, in 2001, he published Verso (winner of the City of Alzira Prize of 2001), a novel – of daring structure and forms, mixing third-person narrative, inner monologue, diary writing, reflections on art – that explores the deceptive appearances of our surroundings.

However, it was after the publication of L'home manuscrit (Manuscript Man) that Manuel Baixauli began to make his name in the milieu of Catalan letters. This work, which explores obsessions related with writing and its capacity for transforming lives and people, has received many prizes and, despite its complexity, has been surprisingly well received by the reading public. In 2014 he published the novel La cinquena planta, awarded the Crítica dels Escriptors Valencians and the Crexells prizes. In Ningú no ens espera (2016), he collected his most celebrated opinion columns published in the press.

Baixauli has defined himself as a re-writer because of his idiosyncracy of constantly reworking his own texts.