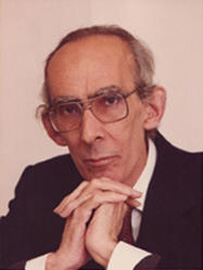 Josep Benet i Morell (Cervera, 1920 - Sant Cugat del Vallès, 2008) has combined his work as an essayist with that of his political affiliations. When he was very young he joined movements that, in the aftermath of the civil war and the imposition of the Franco dictatorship, were fighting for democracy and Catalonia’s national identity. Along with his civic activities, he worked as a lawyer for many years, defending people and institutions that were trying to achieve democracy. In 1979 he decided to devote himself full-time to politics. He has been a Senator in the Spanish Parliament, a member of the Parliament of Catalonia and has served on several commissions that worked to restore democracy, for example the commission for the Statute of Autonomy for Catalonia. In 1985 he was named Director of the Museum of Contemporary History of Catalonia.

Notable among his books are: Maragall i la Setmana Tràgica (Maragall and Tragic Week – 1963), Catalunya sota el règim franquista (Catalonia under the Franco Regime – 1973) and Exili i mort del President Companys (The Exile and Death of President Companys – 1991). He has also written works in collaboration with other writers, for example Barcelona a mitjan segle XIX: el moviment obrer durant el Bienni Progresista (Barcelona in the Mid-19th Century: the Workers Movement in the Progressive Years of 1854-1856), with Casimir Martí. He has published numerous prologues, articles and essays. The Biblioteca Abat Oliva, a collection of the publishing house Publicacions de l'Abadia de Montserrat, devoted number 100 to him under the title Miscel·lània d'Homenatge a Josep Benet (Miscellany in Homage to Josep Benet – 1991).

Hes was an honoray member of AELC.