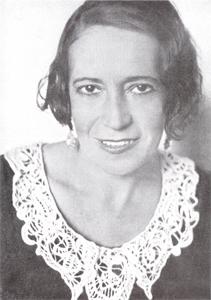 Aurora Bertrana (Girona 1892- Berga 1974) is a singular personality in the world of Catalan letters. Her wide-ranging life, which covered a good part of the twentieth century, is particularly notable for the travel books she wrote. Her first book (Paradisos oceànics – Oceanic Paradises, 1930) was both a great success and a scandalous event in the society of her times, a reception that enabled her to find a niche as a cosmopolitan intellectual in Catalonia in the 1930s. Bertrana was an inveterate traveller who used her knowledge of other cultures to question white hubris, and naturally she did not spare that of Catalan society.

While she worked with many literary genres, her Memòries (Memoirs), which were published in two volumes (1973 and 1975), constitute Aurora Bertrana's other great work. In these books she gives shape to the particular story of her life that led her to want to learn about exotic cultures (Polynesia and Morocco) and to experience first-hand some of the major historical events of the 20th century, not only in Catalonia (the Civil War, to which she bore witness in Barcelona) but on the European scale as well (World War Two and the post-war period as seen from Switzerland)