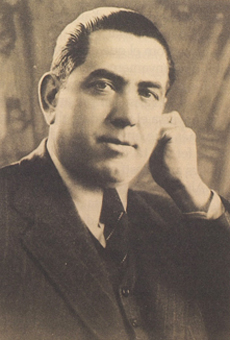 His secondary education was at the Escola Pia in Terrassa but he stopped studying at an early age and set out on his career as a writer, working with several local publications in which he used the pen name "Ferran d'Egara". In 1917, eager to explore the world, he went to France, first to Carcassonne and then to Paris. There he met several French writers, wrote for literary publications in Catalonia and founded the bilingual –Catalan and French– review Plançons. He returned to Barcelona in 1919 and married Enriqueta Casals in 1928. The same year he published the play Clavell de sang (Blood Carnation). In the 1930s he was active in the cultural sphere, working with the group Amics de les Arts (Friends of the Arts) in Terrassa. He also wrote the posthumously published novel Més enllà del rancor (Beyond Rancour). After the end of the Civil War he went into exile in Paris with his son Jaume. Here, he re-established contact with his friend Joan Puig i Ferreter. However, they quarrelled shortly afterwards, whereupon he left Paris and wrote El gran sapastre (The Great Numbskull, 1977), in which he explains why the two writers clashed. Two other books of memoirs also date from this period of intense literary activity: Quan els sentits s'afinen (When the Senses Are Honed, 1959) and De París, el fel i la mel (From Paris, Bile and Honey, 1965).

After 1942 he was very much focused on poetry and also founded the publishing house Albor. In 1949, now planning to return to Barcelona, he signed a contract with Aymà for the publication of his translations of Georges Simenon. In 1954 he was detained for having helped Joan Comorera who was then the secretary-general of the clandestine Unified Socialist Party of Catalonia (PSUC). He spent one year in the Model Prison and, on his release, published Poesia secreta (Secret Poetry, 1955). In 1957 he was imprisoned once again. When he was set free later that year, he threw himself into his work as a writer and wrote several books including El gos udolà a la seva mort (The Dog Howled at His Death, 1958 – winner of the Joan Santamaria Prize); Josep Oller i la seva època (Josep Oller and His Times, 1959 – winner of the Critics' Prize); and Quan els sentits s'afinen (1959). Another work from the period, El Vallès, vigor i bellesa (The Vallès: Vigour and Beauty, 1960), was awarded the P. Maspons i Camarasa Prize. He also published books in the 1960s, these including Món, dimoni i carn (World, Demon and Flesh, 1962), Clavé, un solitari (Clavé, a Solitary Man, 1963) and De París, el fel i la mel (1965).