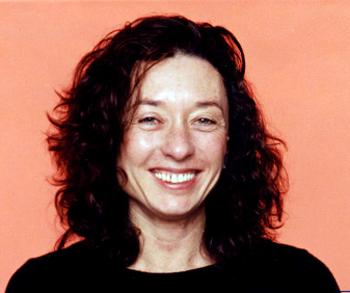 Maite Carranza (Barcelona, 1958) is a writer and scriptwriter. She has a degree in Anthropology, writes fiction for children and young people as well as television scripts, while also teaching Scriptwriting at the university.

In the 1980s she was a secondary school teacher and made her debut as a writer in 1986 with Ostres tu, quin cacau! (Gosh, What a Mess!), a successful novel for young people for which she was awarded the Critics' Prize. She has gone on to publish some forty books, notable amongst which are Frena, Càndida, Frena! (Slow Down, Càndida, Slow Down), Maurici Serrellsuat (Maurici Sweathead) and Vols ser el nòvio de la meva germana? (Do You Want to Be My Sister’s Boyfriend?), along with other more recent, highly successful works such as the trilogy La guerra de les bruixes (The War of the Witches), El clan de la lloba (The She-Wolf Clan), El desert del gel (The Desert of Ice).

Besides her works for children and young people, she has written plays that have been staged and novels for adults. As a scriptwriter, she has worked since the 1990s for several television channels (TVC, TV1, T5, and A3) with scripts for programmes and series such as Pinnic, Poblenou, Secrets de Família (Family Secrets), Nissaga de Poder (Lineage of Power), Rosa, El joc de viure (The Living Game), Laura, Homenots (Big Men), Moncloa digame? (Moncloa, Hullo?), Abuela de verano (Summer Granny) and television films such as Valèria, Germanes de sang (Blood Sisters), La dona de gel (The Ice Woman), Les filles de Mohamed (Mohammed's Daughters) and l'Atlàntida (Atlantis). Some of her scripts have been awarded prizes, for example, the Ondes Prize, TP Prize, ILC Prize, Festival of Biarritz Prize and the GAC Prize. She has worked actively to teach people about the world of scriptwriting and is presently a lecturer in Scriptwriting in the Masters Degree in Scriptwriting at the Autonomous University of Barcelona, the Menéndez Pelayo International University and the Abat Oliva University.

She is a member of Associació d'Escriptors en Llengua Catalana (AELC, Association of Catalan Language Writers).