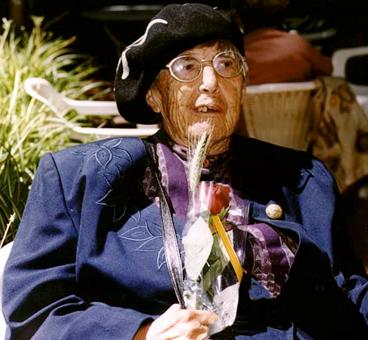 Aurora Díaz-Plaja (Barcelona, 1913 – 2003) was a librarian and writer who also worked as a journalist, critic, translator, lecturer… Throughout her career she maintained a constant activity for the revitalization and regeneration of all aspects involving children's and teenagers literature.

As a librarian she worked initially in Palma de Mallorca, and during the Spanish Civil War, she was responsible for getting the travelling library, the "Bibliobús" (Books Bus), to the Republican battlefront. After the war she took over the organisation of the Libraries of Catalonia, among them being the Ciutadella Park Children's Library in Barcelona, of which she was director from 1963 to 1973. In 1983 she organised the first exhibition of Children's and Young People's Books in Catalan at the Internationale Jugendbibliothek München (International Youth Library of Munich). She also wrote studies in Library Management, education and history of literature, such as Com es forma i com funciona una biblioteca (How a Library is Created and How it Functions, 1960) and La biblioteca a l'escola (The School Library, 1970), La literatura infantil abans i ara (Children's Literature then and now, 1972), amongst others.

As a writer, she published a great number of books and stories for small children, in both Catalan and Spanish, among them being El rey negro (1953), La ruta del sol (1965), Les entremeliadures de Till Òlibaspill (1979), Contes de sal i de sol (1983), Petita història de l'ou com balla (1995), El picarol salvador (1998); while also adapting many classical and popular children's stories. She also wrote literary criticism as a regular columnist in the media (including El Ciervo, Primeras Noticias and Avui) as well as in scientific and cultural reviews (El Món, Lluc, Faristol, Serra d'Or).

She was a honorary member of the Associació d'Escriptors en Llengua Catalana (Association of Catalan Language Writers – AELC).