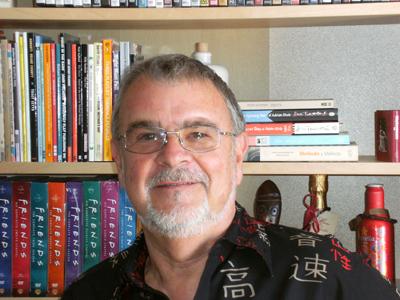 Octavi Egea (Barcelona, 1946) is a novelist, theatre director and playwright. At the age of nineteen he made his debut in the world of theatre as an actor and director of an amateur theatre company. However, it was not until he was around forty that he began to write professionally for a publisher of leisure publications, where he heads the theatre and cinema sections. In 1987 he published his first novel and has not stopped writing and publishing since then. He has written short stories, for example Gent que estimo (People I Love, 1990) and Nova York era la seva ciutat (New York Was His City, 1998), novels such as La senyoreta Freda Kesöc (Miss Freda Kesöc, 1993) and Abaddon, l'àngel de l'abisme (Abbadon, Angel of the Abyss, 2001) and plays, including Davant l'Empire (Before the Empire, 1998), Cadaver? (2002), J.R.S., de dotze anys (J. R. S., at Twelve, 2003) and Lost Persons Area (2007). He has been awarded numerous prizes, notable amongst which are the "La Piga de la Viuda Reposada" for the Erotic Novel in 1992 for La senyoreta Freda Kesöc; the City of Olot Prize for the Young People's Novel in 1992 for Spaghetti per a la Gioconda (Spaghetti for Gioconda); the Ignasi Iglésias Prize for Theatre (1997) for Davant l'Empire; the "Fundació Romea" Prize for Theatre Texts in 2002 per i>J.R.S. de dotze anys; the 2007 October Prize for Theatre for Lost Persons Area; the 2013 Ciutat de Sagunt-Pepe Alba Prize for Theatre for Amami, Alfredo, amami and the Ciutat de Manacor-Jaume Vidal i Alcover Prize for Theatre (2014) for Menors.

Octavi Egea has also adapted musicals, including Grease and Seven Brides for Seven Brothers, which were recently premiered in Barcelona and Madrid.

He is an honorary member of the Associació d'Escriptors en Llengua Catalana (Association of Catalan Language Writers).