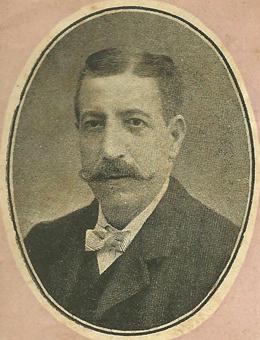 Eduard Escalante (València 1834 – 1895) was a playwright, mainly of one-act farces. After his mother died and his father abandoned him, he was taken in by a working-class family living in the Valencia portside neighbourhood of El Cabanyal. As a young man he met some prominent members of Valencia's cultural circles, including Teodor Llorente, shortly after which he began to combine his work as a painter of fans with writing. His first works for the theatre were two pieces on the life of Saint Vincent Ferrer. Although he wrote one romantic drama, Raquel, he tended to work with the more popular genre of the short comedy. After 1862, the works Què no serà (What Will Not Be) and La sastressa (The Tailoress) marked the beginning of his successful career as a playwright. The staging of the work Un grapaet i prou (Just a Little and That's Enough) in 1868 consolidated his fame.

His humorous farces feature characters from the lower-middle classes of Valencia who, in aspiring to social ascent, change from their Valencian mother tongue to a version of Spanish that is full of Valencian idioms. Some of his archetypical characters are preposterous humbugs, for example the three foreigners in the work Tres forasters de Madrid (Three Foreigners from Madrid, 1876). He published and staged as many as forty-seven works, which took on a distinctive profile over the years, and included such notable pieces as La xala (The Spree, 1871), L'escaleta del dimoni (The Devil's Little Ladder, 1874), Les xiques de l'entresuelo (The Girls on the Mezzanine Floor, 1877) and Les coentes (Pretensions, 1880).

Acclaimed as one of the outstanding Valencian playwrights in the genre of the short comedy, his influence lasted well into the twentieth century.