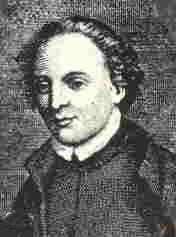 Vicent Garcia (Tortosa ~1579 - Vallfogona de Riucorb, Conca de Barberà, 1623), who was known by the pen name of the "Rector of Vallfogona", was at once a baroque poet and a priest who settled in the parish of Santa Maria de Vallfogona de Riucorb. Though his complete works were published years after his death, in his lifetime he enjoyed great popularity, so much so that imitation of his poetic work by many seventeenth-century Catalan writers gave rise to a phenomenon known as "Vallfogonism". His poetry, which was heavily influenced by Spanish writers of the time, addresses a range of subjects – amorous, scatological and mythological – while he also criticised different aspects of his times, all in an ingenious, elegant and highly ironic style. Notable among his poems are A una hermosa dama de cabell negre que se pentinava en un terrat amb una pinta de marfil (To a Beautiful Lady on a Terrace Combing her Black Hair with an Ivory Comb), Epitafi a la sepultura d'un gran bevedor que morí de gota (Epitaph on the Burial of a Great Drinker Who Died of Gout) and the sonnet Temps (Time), three examples of the very different subject matter he covered.