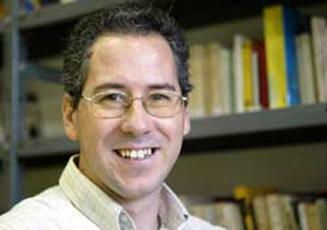 Manel Garcia Grau is a poet, novelist and professor of Catalan Philology at the Universitat of València. His first book of poems was Quadern d'estances (Notebook of Rooms – 1988), which was closely followed by a dozen titles, outstanding of which include Llibre de les figuracions (Book of Manifestations – 1993), Al fons de vies desertes (At the Bottom of Desert Paths – 2002) and most recently La mordassa (The Gag – 2003). His poetry has won prizes such as the Vicent Andrés Estellés (1990), the Golden Rose at the Jocs Florals of Barcelona (1997) and the Ausias March (2000).

Beyond this he has had a solid career as an essayist, particularly on the literary and linguistic themes that are his principal interests. Recently, Garcia Grau tried his hand at the novel with El Papa maleït (The Accursed Pope – Planeta, 2003), a story of intrigue about Pope Luna.

Also; he has written opinion pieces and literary criticism in various newspapers and journals, including Serra d'Or, Levante, Avui, Mediterráneo and the Heraldo de Castellón.