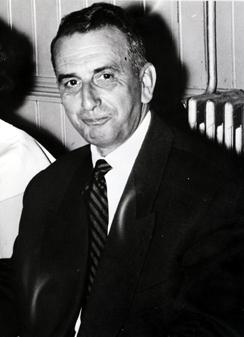 Gumersind Gomila (Maó (Menorca), 1905 – Perpignan, 1970) was a poet, a cultural activist in Roussillon and an artist.

He was a multifaceted personality, mainly known for his poetry. His beginnings as a poet were under the auspices of the literary competition, Jocs Florals, in Perpignan and Toulouse (Languedoc) and it was not until much later that he published four books of his poetic work in one volume. These works were La sorra calenta (Hot Sand, 1943 and 1967), Llucifer (Lucifer, 1966), El vent fútil (The Futile Wind, 1967) and Els ocells morts (Dead Birds, 1969). He was a close friend, in both literary and personal senses, of the poet Josep Sebastià Pons and his sister, Simona Gay, who was also a poet.

In the cultural domain, Gomila was notable for his pro-Catalan and pro-Occitan activism, a lifelong concern with many different aspects, in particular his writings in different prestigious Catalan-language publications.

He was also a painter and ceramicist of note. He earned a living from this and was recognised for the quality of his work by his contemporaries. Even today, Gomila is a writer and artist still to be properly discovered because knowledge of his work was mainly confined to the limits of the geographical zone in which he produced it and restricted by the difficulties in being published in his times.