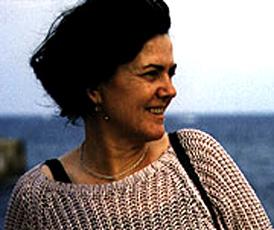 Mercè Ibarz (Saidí, Baix Cinca, 1954) is a novelist and journalist. She has published the report La terra retirada (The Secluded Land), winner of the 1992 Humbert Torres Prize, which was first published in a local Fraga collection and then by Quaderns Crema in Barcelona in 1993. The latter also published her novel La palmera de blat (The Palm Tree of Wheat). These two works form a diptych in which the writer produces documentary and fictional accounts of the same theme: the changes that have taken place in the village where she was born and the links that city life creates with a rural world that is at once ancestral and totally transformed or, in other words, the relations between memory and imagination, between everyday and imaginary life.

In 2002, she published the book A la ciutat en obres (In the City of Works), three stories that shift between reality and dreams and that have some basis in the work of Feliu Elias. This book has led some critics to say that Mercè Ibarz is one of the most outstanding Catalan writers, while the author herself says, “I am not interested in writing about the spectacular changes in Barcelona at the turn of the last century, or about the Civil War or the post-war years. Or even the changes that occurred with the Olympic Games, that great propaganda epic that the city has been immersed in ever since. I write from my own experience and my Barcelona is not the one that appears in the propaganda. Rather, I explore a hidden, everyday, surviving Barcelona."

Mercè Ibarz has worked as a journalist and has also applied her exigent spirit to studies that are close to the genre of the literary and political essay. A notable part of her work has been devoted to biographical studies of Mercè Rodoreda, about whom she has published three books, the last of which is Mercè Rodoreda. Exilio y deseo (Mercè Rodoreda. Exile and Desire, 2004). She has also written studies on documentary cinema, one of which is devoted to Luís Bunuel: Tierra sin pan: Buñuel i els nous camins de les avantguardes (Land Without Bread: Buñuel and the New Avant-garde Paths), which was published by the Valencia Institute of Modern Art in 1999.