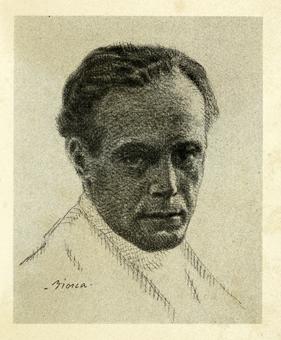 At an early age he joined the literary circles of Barcelona and collaborated with the city´s leading newspapers and reviews, such as Joventut, Catalunya Artística, La Renaixença and El Poble Català. He was also the Paris correspondent for the newspaper La Veu de Catalunya. He is the author of an immense literary work embodied in almost every possible literary genre: poetry, theatre, essay, articles, biography, travel literature, short narrative, prose and novel. He is considered the introducer of historical decadentist novels in Catalan, with titles such as Edmon (1908), L'adolescent (1909), Ildaribal (1915) and La fira de Montmartre (1926), among others. His literary work is in constant contact with the european literary movements of his time.

He translated works by Shakespeare, Leopardi, Tolstoi, Voltaire, Zola into Catalan, and he is mostly known as the translator of Molière's Complete Works, published between 1930 and 1936.

Page by Josep Miàs for AELC.
Cover photograph: Portrait by Joaquim Biosca, included in the works A la deriva (1921), El novel·lista català Alfons Maseras (1922) and Guerau i Marta (1932), among others.
Translated by Josep Miàs.