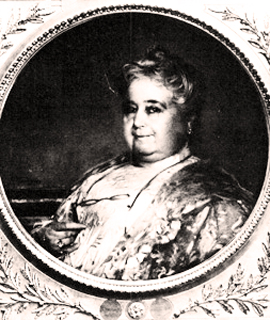 Dolors Monserdà (Barcelona, 1845-1919) was a writer and feminist who was an outstanding member of Catalan society at the end of the late nineteenth and early twentieth centuries. In 1875, after an adolescence surrounded by the literary figures who were friends of her father, she wrote her first works, plays and, above all, poetry, all in Catalan. With her early poems, which were heavily influenced by her religious and patriotic concerns, she won the Jocs Florals (popular poetry competitions in Catalan) on several occasions. Later she published the works Poesies catalanes (Catalan Poems, 1888) and Poesies (Poems, 1911).

It is the genre of the novel that has most perpetuated her memory. Contemporary critics have written about the self-censoring of her ideas that was imposed by the society of the time. The fact is that Montserdà always approached her writing from a moral standpoint and her works offered a feminine perspective that was quite unusual at the end of the nineteenth century. Her work combines local traditions, realism and romanticism, which also expresses her defiance of the literary aesthetics of the period. Her most outstanding work is the novel La fabricanta (The Manufacturess, 1904), her portrait of a woman who moves up the social scale thanks to her hard work and realism, in a way that challenges the Madame Bovary model of womankind, but still defending literature, which Monserdà saw as a useful tool for influencing society.

Dolors Monserdà was an energetic contributor to social causes. She aligned herself with working-class women, always from an ideological standpoint that was compatible with the teachings of the Catholic Church, but she was nonetheless highly effective in improving the conditions of nineteenth-century working women. Her literary and moral doctrines were grounded in a realism that was conditioned by her religious beliefs and that aimed to counteract the influence of certain kinds of literature. In general, her novels offer a very interesting social and aesthetic panorama and a view of the Barcelona bourgeoisie that is frequently critical when viewed from today’s perspective.