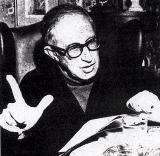 Llorenç Moyà i Gilabert de la Portella (Binissalem, 1916- Palma de Mallorca, 1981) was a poet, playwright and fiction writer. He had a degree in Law and was an assiduous participant in Mallorca's intellectual life besides being a frequent contributor in the island’s periodical publications, especially Última Hora (1977-1981).

He embarked on his poetic career observing the canons of the early twentieth-century Mallorca School with collections like La joglaressa (The Juggleress) and the selection La bona terra (The Good Earth, 1949). In the 1950s, he moved towards post-symbolism and his aesthetics then linked up with the new poetic trends. With the works Ocells i peixos (Birds and Fishes, 1953), Via Crucis (winner of the Mossèn Alcover Prize in 1960) and La posada de la núvia (The Bride's Dwelling - winner of the "Ciutat de Palma" Prize in 1955) he evolved towards a markedly baroque style. In the 1960s, with a clear intention of denunciation, he introduced classical mythology into works that were directly related with the times in which he was living. Two examples of this are Polifem (Polyphemus) and Hispania Citerior (both of which were published in 1981). In the 1970s he wrote I, tanmateix, pallasso... (And, Nevertheless, Clown … - 1978) and other works that were more intimist by nature.

Moyà's more highbrow theatre, which also had critical intentions, is collected in the volume Teatre de la llibertat (Theatre of Liberty - 1993). Outstanding among the works here are Fàlaris (Phalaris – winner of the Ignasi Iglésies Prize in 1961) and the historical drama El fogó dels jueus (The Bonfire of the Jews – winner of the "Ciutat de Palma" Prize for Theatre in 1963). His focus subsequently shifted towards reworking traditional Mallorcan theatre and, from 1977 onwards, he wrote a series of short farces, which were brought together in four trilogies, amongst which is El ball de les baldufes (The Spinning Top Ball, 1981). Influenced by Llorenç Villalonga and Camilo José Cela, he also wrote fiction. He published the short-story collection A Robines també plou (It Also Rains in Robines, 1958), the short novel Viatge al país de les cantàrides (Journey to the Land of the Cantharides, 1993), and Memòries literàries (Literary Memoirs, 1971), which was published in a critical edition in 2004.