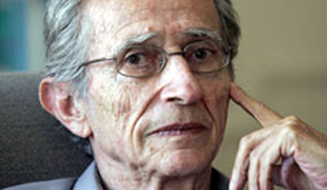 Xavier Rubert de Ventós (Barcelona, 1939) is an essayist, philosopher, politician and Professor of Aesthetics and Composition at the School of Architecture (Technical University of Catalonia).

He is the author of a considerable corpus of essays in which he reflects on art, politics and philosophy. In 1963, he was awarded the City of Barcelona Prize for his work El arte ensimismado (The Engrossed Art), while he also received the "Lletra d'Or" Prize for Teoria de la sensibilitat (Theory of Sensibility, 1968), an outstanding contribution to the genre of the Catalan essay, which was revised and reissued in 2007. In 1973, he was awarded the Anagrama Essay Prize for La estética y sus herejías (Aesthetics and its Heresies, 1974), while a subsequent work, De la modernidad. Ensayos de filosofía crítica (On Modernity. Essays in Critical Philosophy, 1980), which was republished eighteen years later with the title Crítica de la Modernidad (Critique of Modernity, 1998), presents the key elements of his thought. He has also written books in the didactic vein, for example Per què filosofia? (Why Philosophy?, 1983) and Filosofia d'estar per casa (Stay-at-Home Philosophy, 2004) and others of political content such as El laberinto de la hispanidad (The Hispanic Labyrinth – winner of the "Espejo de España" Prize, 1987) and Catalunya: de la identitat a la independència (Catalonia: From Identity to Independence, 1999), inter alia. Furthermore, he described his experiences as a member of parliament (1982 – 1986) in the book El cortesà i el seu fantasma (The Courtier and His Ghost, 1991), which was awarded the Josep Pla Prize.