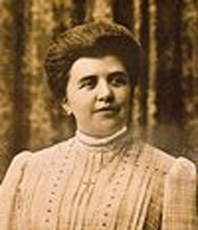 Maria Antònia Salvà (Palma, 1869 - Llucmajor, 1958) was the first modern woman poet to write in Catalan. With a background in the cultured milieu of the Mallorcan Renaixença (Rebirth), she became known in the 1890s under the tutelage of Miquel Costa i Llobera. Her work, then, may at first sight first be classified as being akin to that of bucolic writers of the so-called Mallorca School, with representative poems about the family mansion at Llapassa (Llucmajor), country people and their work, with a background of the popular songs and verses that were so much part of life in her times, and an expression of the ancestral rural world.

However, she was soon to come into contact with the generation of younger poets, for example the Mallorcan Miquel Ferrà or Josep Carner, who would make her work known in Barcelona, in particular her translation of Frederic Mistral's Mireia (1917). Notable among her works are the collections of poems Espigues en flor (Wheat in Bloom, 1926), El retorn (The Return, 1934) and Lluneta del pagès (The Farmer's Little Moon, 1952). Her voice, in its contemplation of nature, goes to the essence of things, moving from description to a beautiful and subtle interiorisation that evokes states of the spirit and subjectivity itself.

She was also an outstanding translator and prose writer. Among the authors she translated are Alexandre Manzoni, Giovanni Pascoli and Francis Jammes. Her prose works include Viatge a Orient (Journey to the East, 1907), which was not published until 1998 and, in particular, the texts collected in Entre el record i l'enyorança (Between Memory and Yearning, 1955).

As in the cases of other women writers in the past, the work of Maria-Antònia Salvà has had to contend with social prejudices that deemed literature by women as being second-rate. Nowadays, however, her work is regarded as being among the modern classics.