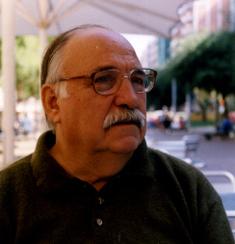 Sebastià Sorribas (Barcelona, 1928-2007) has a degree in History. He made his debut as a children’s writer with his book El zoo d'en Pitus (Pitus's Zoo) winner of the 1965 Folch i Torres Prize. This book has gone into more than thirty editions and has been translated into several other languages, for example French, Galician and Basque. In 1973 he was awarded the CCEI Prize for Els astronautes del "Mussol" (The "Owl" Astronauts) and in 1983 he published La cinquena gràcia de Collpelat (The Fifth Grace of Collpelat), which received the 1983 Generalitat Prize and the 1984 Serra d'Or Critics’ Prize. Besides his children's books, he has written numerous books for young people on the history of Catalonia, some of which have been awarded the Serra d'Or Critics' Prize.