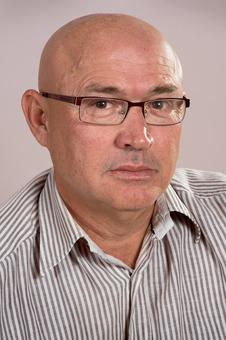 Salvador Vendrell (Fortaleny, 1958) is a columnist, writer and teacher at the Joan Fuster secondary school in Sueca.

He was awarded the 2013 City of Sagunt Prize for his novel Quan truquen de matinada (2014). He has been a columnist for the newspaper Levante-EMV since 2002 and has published two collections of his journalistic writings in the books Columnes de paper (2011) and Els dimonis que dicten (2016).

He has a degree in Geography and History from the University of Valencia and presently occupies the Valencian Chair of Secondary School Teaching. He has devoted a great deal of time to his studies of language and literature and has published a considerable amount of teaching material, especially text books for secondary school and A-level students. He has also translated several books for children and young people and has updated classics including the chivalric novel Curial i Güelfa (1993), Espill (2015) by Jaume Roig and L'Odissea (2017), among others. Moreover, he has co-authored and authored adaptations of Alí Babà i els quaranta lladres (1994), Els viatges de Marco Polo (1995) and Tirant lo Blanc per a infants (2017), among others. At the same time he is the author of the biographies Ausiàs March, el poeta i el seu temps (1997), Jaume I, el naixement d'un poble (1998) and Joan Baldoví. En clau valenciana (2017).