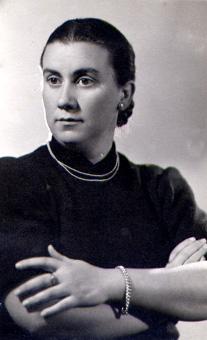 Cèlia Viñas (Lleida, 1915 – Almeria, 1954) studied Arts at the University of Barcelona. She wrote poetry, theatre, narrative and memoirs and a considerable part of her work is devoted to children’s literature.

She was passionate about this and would devote much of her energy to playwriting and as director of young people’s theatre groups during her years in Almeria.

She went to live in Almeria in 1943 when she became Professor of Literature. The city now has a secondary school and a literary circle that bear her name in testimony to the great contribution she made both with her literary output and her work in education, which was very advanced at the time. The post-war circumstances and her residence in Andalusia meant that she would write a considerable part of her work in Spanish.

In the 1950s she appeared in the anthology Els poetes insulars de postguerra while, in her beloved Mallorca, the publishing house Moll would bring out a volume of her poems in Catalan, Del foc i la cendra (1953), a set of writings from her youthful and mature years that is outstanding among the poetic works of the period. This book was republished in 2006 with a prologue by Cèlia Ribas. She also wrote memoirs, including De esto y aquello (On This and That), which was posthumously published in Almeria in 1995. The critic Francisco Galera Nogales has written an excellent study on Cèlia Viñas, Vida y obra de Cèlia Viñas (The Life and Work of Cèlia Viñas – 1991). She left two unpublished novels on her death.