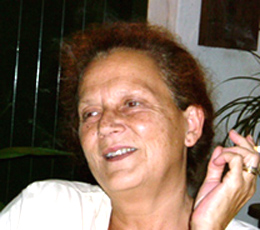 Margarita Ballester (Barcelona, 1942) is a poet and History teacher. She completed an Arts degree in Barcelona and then lived in Madrid and Paris. In cliché terms it might be said that this is a writer who has come into her own with maturity but it is also true that, although she published her first works after turning forty, her poetry has continued to grow with time, thanks to her extremely exigent work as her own toughest critic.

Hence, after publishing some early poems in the review Reduccions, her first book, L'infant i la mort (The Child and Death, 1989), was published and was awarded the Rosa Leveroni Prize. The Catalan critics celebrated the appearance of this new voice but the author continued working at her own pace until 1995, when the publication of her work Els ulls (Eyes) meant that she would thenceforth be seen as a key Catalan poet. Some ten years later, in 2004, she published her hitherto latest work, Entre dues espases (Between Two Swords), which received the prestigious Josep Maria Llompart Prize for Poetry, as one of the Cavall Verd Prizes awarded by the Associació d’Escriptors en Llengua Catalana (Association of Catalan Language Writers).

Margarita Ballester uses powerful and suggestive images, frequently looking through the gaze of the other arts in order to shape her own creation that is founded on the word. She lives on the island of Menorca, where she teaches and continues to work on her poetic project, which, for these times, is of exceptional intensity.