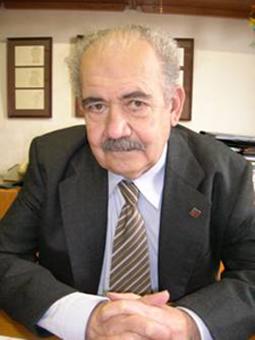 Albert Jané i Riera (Barcelona, 1930) is a poet, grammarian and translator whose professional activity is mainly concerned with study and teaching of the Catalan language and literature for children and young people. As a self-taught linguist, he began to teach Catalan to adults in 1958, shortly after which, in 1961, he was one of the contributors to Signe, the key reference grammar of the time. This was followed by Gramàtica essencial de la llengua catalana (Essential Grammar of the Catalan Language, 1967), Pas a pas (Step by Step, 1988), and Diccionari català de sinònims (Catalan Dictionary of Synonyms, 1977). He has published numerous works of linguistic and grammatical reflections, notable amongst which are Aclariments lingüístics (Linguistic Elucidations, 1973), not to mention his frequent articles in the daily press and reviews, including Tele-estel, Llengua Nacional and Avui.

In 1963, he began to work as an editor and corrector with Cavall Fort, a magazine offering literature and entertainment to young people that had been created two years previously, and he was its director from 1979 to 1997. Apart from his regular contributions to this magazine, he has translated and adapted many works for children and young people from different languages (French, English, Italian, Spanish and Provençal). He has also translated such well-known comics as the Barrufets (The Smurfs) and Aquil·les Taló (Achilles Heel) series, along with traditional stories such as The Little Tin Soldier (1983) and Little Red Riding Hood (1984) and film scripts, for example that of Cinderella, the first children's film to be translated into Catalan. Also to be highlighted are his collections of children's stories Rondalles de Catalunya (Stories of Catalonia, 1975), Rondalles d'arreu del món (Stories from around the World, 1980) and A la vora del foc (At the Fireside, 1982). Moreover, he has offered an account of his experience as a writer in the diaries Tal dia farà l'any (It'll Be a Year That Day, 1991) and Els dies i els llocs (Days and Places, 2004).

In 1990, he was awarded the Creu de Sant Jordi (Saint George Cross) of the Generalitat (Government) of Catalonia while, in 1997, he received the National Prize for Written Journalism. Jané is a member of the Institut d'Estudis Catalans (Institute of Catalan Studies) and he is an honorary member of the Associació d'Escriptors en Llengua Catalana (Association of Catalan Language Writers – AELC).