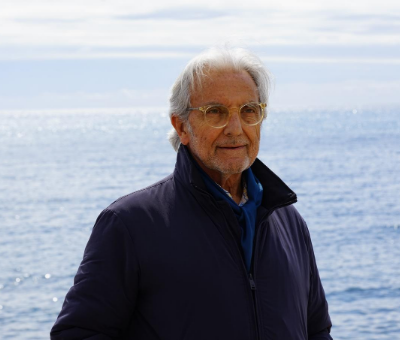 Joan Adell Álvarez (Blanes, la Selva, 1938), who graduated in Pharmacy and Medicine, has been writing since he was an adolescent and has won numerous prizes for poetry and fiction throughout the Catalan language territories.

However, it was not until 2007 that he published his first novel El nàufrag, winner of the Rei En Jaume Prize in the Balearic Islands. He has been writing non-stop ever since and receiving prizes and recognition for his work, some of which has materialised in published form, such as the novels Matins grisos (2010), which was a finalist for the 2010 Ramon Llull Prize, Només són pedres (2017) or Alba (2017), awarded the Ciutat d'Elx for narrative; or the books of poems Tres Estrelles Michelin (2011) and Taronges calentes (2017), among others.

He was a late starter but is now so enamoured of reading and writing that he doesn't like the idea of dying if heaven won't permit him to continue, even if it has to be with a battered old typewriter.