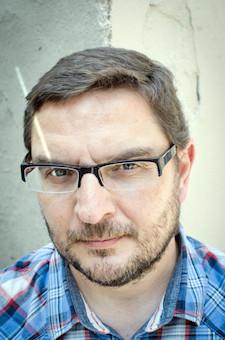 Xavier Aliaga (Madrid, 1970) is a journalist and writer.

With a degree in Catalan Philology, he is currently head of the Culture section in the weekly El Temps, a columnist for Levante-EMV, El Punt-Avui and La Veu del País Valencià, and also a talk show guest on Radio Onda Cero and the television station Popular TV. From 1997 to 2007 he was head of communication for the parliamentary groups Esquerra Unida, Entesa and Compromís and, from 2007 to 2013, he wrote for the cultural supplement Quadern of the daily El País. He has also worked with publications like Caràcters, L'Espill and L'Illa.

As a novelist, Xavier Aliaga is the author of Si no ho dic, rebente (2005, Vila de Lloseta Prize for Fiction), Els neons de Sodoma (2009, Andròmina Prize for Fiction in the October Prizes 2008), and Vides desafinades (2011, Joanot Martorell Prize for Fiction of Gandia, and Critics Prize for Valencian Fiction Writers 2012). He has also published the children's book El meu nom no és Irina (2013, winner of the 2014 Critics Prize for Valencian Fiction Writers and the 2014 Samaruc Prize). Moreover, he has written the crime novel Dos metres quadrats de sang jove (2014). In 2017 he was awarded the Pin i Soler Ciutat de Tarragona Prize for the novel Les quatre vides de l'oncle Antoine.