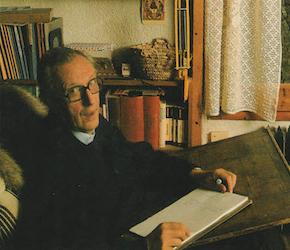 He had only just finished the baccalaureate when the Spanish Civil War broke out and he was sent to fight on the Ebro front as a member of the so-called "Baby Bottle Brigade". At the end of the war he was interned in a concentration camp in Zamora where he fell ill with tuberculosis. Accordingly, after 1940, he spent six years convalescing in Matadepera. In 1946 he joined the Sant Felip Neri parish in the Gràcia neighbourhood (Barcelona) but, after suffering a relapse, was sent to the Solsona Hospital. He then studied Theology at the Solsona Seminary where he was named Prefect. After 1958 he was a priest in the parish of Santa Maria de Queralt, where he began his extensive oeuvre as a writer. He published some forty books, notable amongst which are Francesco (1967) and, most outstandingly, Mossèn Tronxo (1989), a much acclaimed work describing the joys and vicissitudes of a rural priest. He received the 1996 Ramon Llull Prize for Santa Maria, pa cada dia (1996). He published many fictional works and essays including the titles Pregària al vent (1978), Paràbola dels retorns (1980), Sant Benet, mil cinc-cents anys (1980), Vent sense paraules (1982), Més d'un dia de mil anys (1989), Logos, teologia i teòlegs (1989), Camins i silencis (1995), L'Església amb cabres i tot (2004) and Pluja neta, bassals bruts (2013). He also published the short story collection El bon déu dels bolets (1999) and his memoirs El sac dels records (2015).

He wrote regularly for publications like Avui, Serra d'Or and Saó, and in 1995 he was awarded the prestigious Creu de Sant Jordi (St. George Cross) of the Generalitat (Government) of Catalonia and, in 2014, the Gold Medal of the Town of Berga.