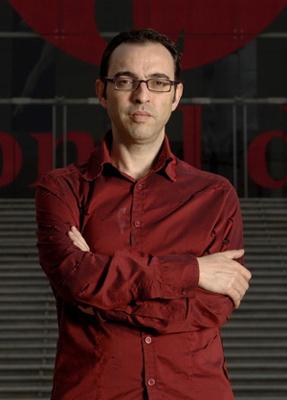 Sergi Belbel (Terrassa, 1963) is a writer, theatre director and translator. He graduated in Romance and French Philology from the Autonomous University of Barcelona (UAB) in 1986, is a founding member of the UAB "Aula de Teatre" (Theatre Hall) and has been teaching Dramatic Art at the Barcelona Theatre Institute since 1988. Since the 2006-2007 season, he has been director of the Teatre Nacional de Catalunya (National Theatre of Catalonia).

In 1985, he received the First Marqués de Bradomín Prize for a Spanish-language version of his first play, Calidoscopios y faros de hoy (Kaleidoscopes and Beacons of Today) and has been producing plays non-stop ever since, with high praise from critics and public alike, both within and outside of Catalonia. In 1987 he was awarded the City of Granollers Prize for Dins la seva memòria (Inside Memory) and the Ignasi Iglésias Prize for Elsa Schneider. Again, plays like La sang (Blood, 1988), Després de la pluja (After the Rain – winner of the 1993-1995 Generalitat (Government) of Catalonia National Prize for Dramatic Literature, and the 1994 "Serra d'Or" Prize), Morir (To Die – winner of the 1995 Born Theatre Prize), El temps de Plank (Planck's Time, 1999), Forasters (Foreigners – winner of the 2005 Butaca Prize for best play and best stage text), Mòbil (Mobile, 2005) and A la Toscana (In Tuscany, 2007), are all highly sucessful works. The considerable international presence of Sergi Belbel is more than evident in the great number of his works being performed in other countries, and the many translations of his plays into more than fifteen languages.

With his stage works of agile, direct rhythm, in which time and human communication and its effects on relationships are constants, he is one of the most representative voices in contemporary Catalan theatre and among the most widely known Catalan playwrights of all times.

He is a member of the Association of Catalan Language Writers (AELC).