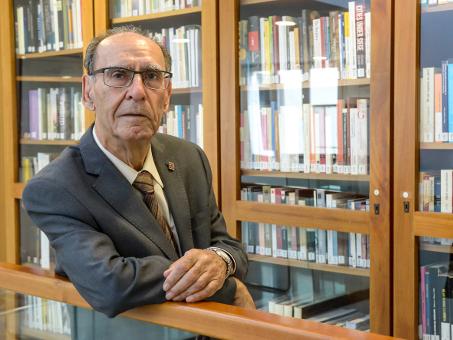 Jordi Pàmias (Guissona, 1938) is a poet and essayist. His first book of poems, La meva casa (My Home), became known in 1969 after it received the Joan Salvat Papasseit Prize. This was followed by a number of other collections that were awarded a wide range of prizes. Notable among them are Flauta del sol (Sun Flute, winner of the 1978 Carles Riba Prize), Àmfora grega (Greek Amphora, winner of the 1985 Vicent Andrés Estellés Prize) and Narcís i l'altre (Narcissus and the Other, winner of the 2001 Miquel de Palol Prize). Thanks to the quality and constancy of his writing he has become one of the most representative voices of his generation and a reference for new writers. This is highlighted by the fact that, in 2002, he received the Josep Maria Llompart Prize (Best Book of the Year) for his collection Narcís i l'altre. It was followed by the books of poems Terra cansada (2004), awarded the Crítica Catalana and Crítica Serra d'Or Prizes, La veu de l'àngel (2009) and Al cor del món (2013), among others. Pagès publishing house edited his Complete Poetic Works (2004-2016) in six volumes and more that 1.100 pages.

As a result of his continuous research and literary curiosity, he has also worked in other genres, for example theatre (Camí de mort – The Path of Death – 1979) and essay (Quadern de tres estius – Notebooks from Three Summers – 1986). He worked for thirty years teaching Language and Literature at the Màrius Torres Secondary School in Lleida.