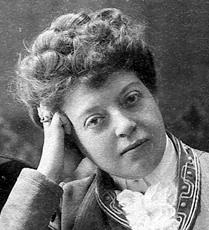 Carme Karr (Barcelona 1865-1943) is one of Catalonia's outstanding literary figures of the early twentieth century. Her work embraces several genres (children's stories, theatre, novel and essay) but she is especially notable for her work as a journalist and cultural activist. She created and directed the review Feminal, which was aimed at informing a female audience about all kinds of creative work being produced by women. Feminal was a means of bringing women artists to light and offering cultural education to women of the times, while today it is a key resource for understanding the period in which it was published.

Karr's life and work were marked by her commitment as a feminist. Within the framework of bourgeois reform, she spoke out for change in gender roles and in favour of redressing the inequalities between the sexes in the domains of education and culture. Literature, journalism, lectures, courses and her activities in different kinds of clubs provided her with platforms for pursuing her goals.