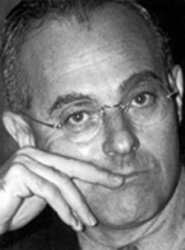 Antoni Marí (Eivissa, 1944) is a poet, essayist and fiction writer. He lives in Barcelona where he is Professor of Theory of Art at the Pompeu Fabra University. As an essayist, he has focused his writing around his studies of aesthetic, literary and musical ideas of the 18th and 19th centuries, themes he has addressed in books like Euforió, esperit i naturalesa del geni (Euphorion, Spirit and Nature of Genius, 1979), La voluntat expressiva (The Expressive Will, 1988) and Formes de l'individualisme (Forms of Individualism, 1994).

He divides his creative writing between fiction and poetry. As a poet, he has recently brought together all his published works in Tríptic des Jondal (Triptych from Jondal, 2003). His fictional works revolve around philosophical concerns, for example the books El camí de Vincennes (The Way to Vincennes, 1995), the memoir El vas de plata (The Silver Goblet, 1991) and Entspringen (2000). He has been awarded such prizes as the Serra d'Or Critics' Prize and the Prudenci Bertrana Prize for the Novel.

Antoni Marí is an honorary member of AELC (Association of Catalan Language Writers).