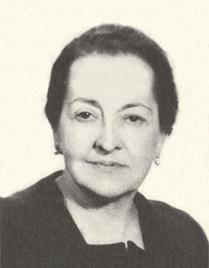 Roser Matheu (Barcelona, 1892 – 1985) was a poet and prose writer who, although little known, produced a considerable body of work from the years of her childhood until the 1980s. Writing was part of her life, a continuous activity whether her works were published or not, for whatever reason. At certain times she clashed with her father, the writer and publisher Francesc Matheu, who opposed Pompeu Fabra’s linguistic norms but who also agreed to bring out the magazine Feminal of which Carme Karr was director.

She wrote poetry and prose on different subjects. Her poems adopt classical forms, reflecting religious and family motifs or her personal experience. In 1932, she was the winner, under a pen name, of the Flor Natural (Natural Flower) Prize in the Barcelona literary competition, the Jocs Florals, which caused a sensation once her identity was made known.

Her prose writing is mainly devoted to literary analysis and biography. Matheu is outstanding for her interest in reviving interest in women writers, specifically through her investigations into the personalities of Dolors Monserdà, Montserrat Garriga, Francesca Bonnemaison and Palmira Jaquetti in the book Quatre dones catalanes (Four Catalan Women), in which she combines biography, analysis and memoirs. Noteworthy also is the anthology Les cinc branques: poesia femenina catalana (The Five Branches: Catalan Women Poets), which, written with other authors, is the first historical anthology of poetry written by women in Catalan, covering the long period from the Middle Ages through to 1975.