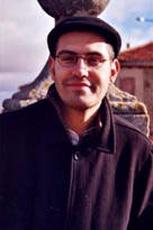 Manuel Forcano (Barcelona, 1968) is a poet and professor of Hebrew and Aramaic at the University of Barcelona. His poetry, which shows its classicist roots yet simultaneously feels very up to date, has been well received critically for managing a simplicity that evades neither complex concepts nor erudite references. Beginning with his first volume, Les mans descalces (Hands Unshod – 1993), Forcano has built a body of work that has received numerous prizes, including the Josep M. López Picó, the Jocs Florals of Barcelona, the Carles Riba or the Miquel de Palol poetry prizes.

His knowledge of Semitic languages has made Forcano a sought-after translator, above all for poetry. Outstanding are his Catalan versions of works by Yehuda Amichai and Pinchas Sadé. He won the 2002 Cavall Verd Prize (awarded by the Associació d´Escriptors en la Llengua Catalana) for his translation of Amichai's book Clavats a la carn del món (Nailed to the Flesh of the World ).

He published the books of poetry, Corint (Corinth), winner of the Jocs Florals in Barcelona in 2000, and Com un persa (Like a Persian), which garned the prize at the International Tívoli Europa Giovanni competition in 2002.