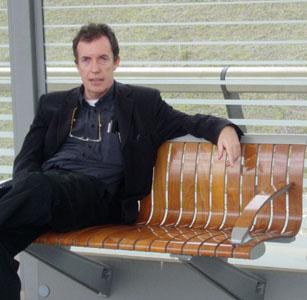 Miquel de Palol (Barcelona, 1953) studied Architecture and is a poet and fiction writer. In 1982 he received the Carles Riba Prize for Poetry with El porxo de les mirades (The Porch of Gazes), which also received the 1984 "Serra d'Or" Critics' Prize. His novel El jardí del set crepuscles (The Garden of the Seven Twilights) received the 1989 Joan Crexells Prize, the 1990 "Serra d'Or" Critic's Prize, the 1990 National Critics' Prize, as well as the 1990 National Prize for Catalan Literature. This was the beginning of a fictional oeuvre that lies somewhere between the fantastic, the legendary and philosophical speculation and that includes the novels Ígur Neblí (1994), El Legislador (The Legislator, 1997 – Josep Pla Prize), Consulta a Ripseu (Consulting Ripseu, 1997) and El Quincorn (The Whatahorn, 1998 – winner of the Sant Jordi Prize), Un home vulgar (A Vulgar Man, 2006 – Joanot Martorell Prize) and the stories and prose pieces in Grafomàquia (Graphomachy, 1993), along with Contes per vells adolescents (Stories for Old Adolescents, 1997 - Victor Català Prize), and other works.

He is a member of the Association of Catalan Language Writers (AELC).