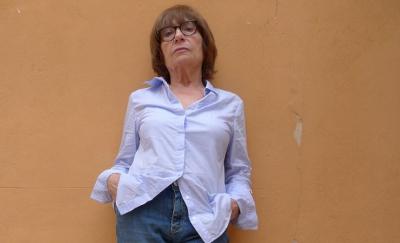 Affectionately clinging to her grandfather's arm, Marina strolls along avinguda Jaume III. It's almost nightfall and the shop windows, bold and sophisticated, draw the gazes of the passers-by.

"What do you want me to buy you? Is there anything you want?" her grandfather asks. Of all his grandchildren, she is the one that has always been dearest to his heart.

"I like these shoes", she says, putting her finger against the glass to point at them. Of simple lines and unadorned they are, nonetheless, the most expensive in the display.

"That's fine", the man answers getting out his wallet as he gazes at her half entranced as if she were still a little girl.

Very thin, pale-skinned, her hair dyed Scandinavian yellow, lips like two jujubes with contours pencilled in brown, she is really his wife, many years ago of course when he first met her as a young man full of complexes because of being so short and stocky, but he did have two boundless ambitions: he was determined to get rich quickly and conquer the most goddamned exciting and distinguished girl in the town, though he was competing with a lot of other suitors. Much of his future depended on this success. Virility.

His granddaughter calmly sits down inside the shop trying on the shoes and he looks back and watches himself, first taking off his rustic sandals and leaving them neatly side by side under a mastic shrub very near the sea, beneath a placid, pale-lilac sky with low-flying drifts of white gulls. And just when his granddaughter starts to take a couple of steps to make sure that the shoes fit her properly, he starts running in pursuit of the girl, as blonde as bread, among the shrubs and reeds. When his granddaughter is standing at the till holding out three notes of a hundred to the shop assistant, he throws himself on top of the girl and is lost among the golden wisps of her hair, swimming in the turbulent waters of her sex.

It was precisely during that short time of enjoyment, that one extra moment of possession and glory, that Marina's mother was conceived.

She is hanging from his arm again. In her other hand she is holding the bag of shoes. She walks obliviously, as if she has no will and her grandfather is dragging her. This way, she feels small, protected, beloved.

"Tell me again about how you knew you'd become a man", she says.

"I've told you over a thousand times. I started to work as a waiter in one of the bars in the square. When I got my first pay packet I felt like a real man even though I was only fourteen."

Marina laughs. She laughs uninhibitedly when the electric Christmas garlands suddenly light up and a shower of stars tumbles down above them heightening their pleasure in walking together.

"And were you rich when you were twenty?" she asks, knowing what the answer will be.

"Almost. At that time, if you were sharp enough, it was easy to make money. You bought a house on the coast for nothing, turned it into a restaurant and soon you had enough to build on a block of rooms and then you had a little hotel. The tourists were flocking in so you treated them like herds of cattle because they didn’t care how they slept or what they ate … And then, smuggling tobacco and coffee wasn’t too risky and it paid very well.

Marina keeps laughing, happy with this. She's studying History of Art in Rome to please her mother who, very sweetly but with just a touch of hysteria, insists that she does. But she's happy just going shopping. Moreover she's in love.

"What are you looking at?" her grandfather asks, seeing that she's stopped at a window full of toys.

She goes into the shop and the man, leaning against the glass, is shocked to see his granddaughter's face in the middle of a pile of animals. Even though they are only plastic or cuddly animals. If any bastard ever harms her, he promises himself, he'll kill him.

She soon emerges, very happy with another bag, this one enormous, with the dog's ears sticking out, all pointy and stiff.

"I don't want to go back to Rome", she blurts out.

"Your mother would be really upset, not to mention your grandmother. They won't be able to boast about you with their friends."

"Well, they can go themselves! Or send one of my brothers!"

"Your brothers are still too young, apart from the fact that they're not very bright. I don't have any ambitions for any of them. You're worth the whole lot put together, Marina. You've got to have aspirations."

"No granddad, no. I don't want to have aspirations", she says, showing off. "Will you buy me an ice cream? Like when I was little? Come on, let's go and have an ice cream together."

They go into the first bar they find under the arches. They sit down next to the window, staring at the street. A surly-looking beggar grimaces at them behind the glass and he digs into his purse looking for a euro because, although he’s made his money easily and not very scrupulously (that stormy evening frequently comes back to him, his smuggler friend flaying around in the rough sea and calling for help, while he started up the motor of the launch and fled from the coastguard), he's a man who still keeps from his childhood a few golden rules about good works. But a flood of people coming out of El Corte Inglés first drags away and then engulfs the beggar as easily as the swirling water swallowed up his friend.

He immediately starts to eat the ice cream they've just been served, two balls of extra creamy and one of strawberry and, despite this, the surge of burning rosy pride that flowed through him just a second ago like a tide of exalted spirit has now vanished from his skin and the knotty veins of his temples, concealed by two wisps of white hair, are standing out in alarming purple contrast: I've got four grandchildren, but there's no sign that gives me any hope for the future; ah well, there's my lover, yes, she's got a few bees in her bonnet but, besides her fees in the language school I'm also paying the rent of her apartment. All this without being too sure of her fidelity – sometimes I don't know why she puts up with an old fellow like me if it's not for the money she gets out of me.

However, thinking about his very young lover at the same time as he's having an ice cream with his granddaughter doesn't seem totally decent so he brushes away these digressions like dandruff from the lapels of his coat and stares at Marina's high and graceful forehead. If some bastard dares to hurt her, he tells himself again, I'll kill him.

Marina suddenly stands up. She cranes her long neck to look across the street.

"You see that young guy in the blue raincoat?"

"There are lots of young guys in blue raincoats."

"That one, a bit on the fat side, not very tall, with short hair."

"All right. All right. Let's leave it at that, you'll have him", he replies in a rush of altruism and love. But then, when he looks squarely at his granddaughter, instead of collecting a grateful smile, he thinks he's captured some very deep worry under the hollow cheeks and eyes sunken in yellowish circles. Like his wife every time she was expecting. There must be, he thinks, some photograph of her pregnant tucked away in some drawer. And suddenly the scene floods back, totally clear, without a trace of the cosmetics with which memories tend to be made up. Without the pine trees and without the shrubs. It was in a desolate patch of land, under a sky of harsh colours, with the heads of slaughtered animals floating by where, unceremonious as a donkey, he threw the richest and most desirable girl in the whole town to the ground and mounted her.

Marina beckons to the young man, who comes over. When the grandfather sees him close up, his stomach churns. The same air of unscrupulous show-off that he had at the same age, the same direct, brazen, uninhibited gaze.

The boy holds out his hand with a smile that seems to him as clear and defiant as a mirror. But, instead of challenging his own image, he takes out the knife he always carries in the inside pocket of his jacket and thrusts it deep into the young man's chest. The young man staggers at first and then falls full-length on the floor with a far-away and astonished expression that leaves no one in doubt that he’s gone straight to the other world.

(Now, when two policemen are taking the murderer away, he turns to Marina who's frozen to the ground with her mouth full of exclamations that don't come out, and says, "It's all right, darling, I've been wanting to kill myself for a long time.")