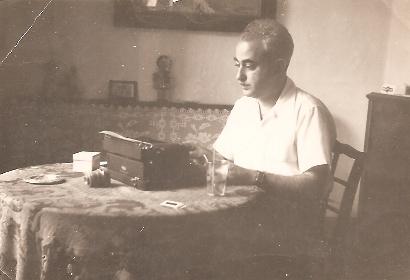 A key figure in the project of standardising the Catalan language and launching the new modernised literature of the Balearic Islands in the years following the Civil War, he was a great reader and scholar of poetic expression as well as being known for his influence as a mentor with the “50’s Generation” and, most especially, the writer Blai Bonet.

He is the author of short, pioneering works of outstanding quality, notable among them Memòries d’una estàtua (1953) and the short story collection La vida en rosa (1957). His poetry has been collected in the volume El viatger (2002).

A man of all-embracing curiosity, he published more than five hundred articles in a range of periodical publications and journals. Also of importance is his work studying and popularising the history of Santanyí and nineteenth-century Mallorca. Moreover, he gave public lectures and was a tireless promoter of culture in general.

In 1958, together with Andreu Julià and Perico Pomar, he founded and edited Santanyí, a fortnightly publication which went beyond local bounds to become, thanks to his involvement, one of Mallorca’s most interesting periodicals during the years of cultural repression after the Civil War.

If critics have been able to talk about a Santanyí literary tradition, or even school, it is thanks to Bernat Vidal’s mentorship of Blai Bonet, Llorenç Vidal, Miquel Pons, Antònia Vicens and Antoni Vidal Ferrando, all of whom were from Santanyí.

At the age of forty-eight, he was afflicted with a serious illness which led to his death in 1971.