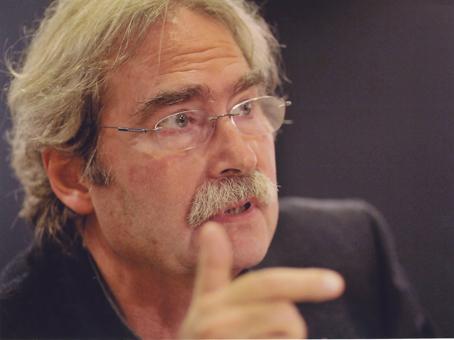 Zorka stopped smiling when they took away the only thing she loved, her son of twenty-some years who'd never grown up, who still drooled and had never learned to read because his eyes and head were in too much of a tangle. But he was good enough for the war so they took him off with them.

Zorka often thought of her Vlada and wept bitter tears to imagine that a thousand bullets could make a sieve of his empty head or that the soldiers without a god and without a soul might taunt him because he never stopped smiling and showing that unsightly hole in his mouth. Zorka got into the habit of sitting in her dining-room, the closely-patterned floral oilcloth spread on the table, her hands resting on it and her gaze fixed on some patch of light, letting the hours go by as she remembered the idiot little giggle of her son. Some afternoons, memory moved faster, back into Vlada's childhood when nobody could have said that the boy might be a bit slow when it came to words and thinking, and when she still believed she would raise a fine strapping son. Her thoughts roamed still further back, to the first days of living alone because a bolting horse had killed Petar, the Petar Stikovic she so admired, the strongest man in the village, after which she, pregnant with Vlada, had been left with her mouth hanging open for the rest of her days. And she remembered the times when, before she was married, she was the pretty girl from Black House and her surly brothers managed their joint inheritance as best they could, and she asked nothing more of life than that. Zorka of Black House remembered these happy times to clear her head, even just for a few instants, of the pity of Vlada's vacant giggle, which became increasingly harder to bear as time went by. This way, Zorka's days seemed shorter.

Eventually, with all this retreating into her thoughts, she forgot to talk to other people and started to keep herself going with draughts from the hogshead and salt cod in order not to have to cook, in order not to have to do anything, to have more time to ruminate about the son that had been taken away by soldiers who didn't have a god and who didn't have a family. She left the house mid-afternoon every day, always to go, dragging her feet and raising dust, beyond the last houses to contemplate the path along which they'd taken him and there she would remain until dusk when the shadows lengthened and paled and people began to wonder what was wrong with Zorka because it was time to be thinking about dinner, but not even her neighbours dared to say a word to her because her gaze had turned to vinegar.

Black House had always been a silent place, as if the walls of the old family seat both foreboded and remembered the death that had fallen upon them in so few years. So the neighbours didn't hear Zorka's whimpering as she sat there at the table, and more than one of them wondered what the poor woman was doing locked up there for so long and they were amazed that she could withstand life's blows living there like a stone, feeding the bitterness of her weeping day after day. And Zorka, immobile at her table, swallowed the hours until the day that was exactly three months after they'd taken her son away, and then she wanted to cry out loud, very loud, to explode all the bad blood that had dammed up in her ninety days of rage. In order not to be heard by any of her neighbours, she put her head in the old wood-fired oven and howled half the night until she couldn't howl anymore.

When rumour had it that the gunshots were coming closer and that wounded bodies were seen floating down the Rzav, Zorka tried to reinforce her desolation and every day at the same time around midday she set off to the Gel bridge to sit there on an angular stone to watch the hours go by and the dead floating down the river which, when she was a child, had given them carp and happy times. At first she apprehensively scrutinised the bodies to see if she could recognise her son, but what she was really doing was to guess at the dark deaths in the eyes of the drowned and she waved goodbye with her hand and said goodbye, my children, why have you died when so little time ago you were still playing hide-and-seek, and they didn’t answer her even though they still looked at her with their grimace of fear before them. Now the people, standing at the doors of their houses, said look at Zorka, she's going down to the river, poor woman, and at lunchtime too. And they said may God Almighty protect her and went inside their houses because, since the Rzav had started bringing down the dead, there was a curfew in the village that began at midday.

One day, Zorka ran into a detachment of well-armed but ragged and filthy soldiers, unshaven after several days in the forest and looking for a bit of action. They roughly told her that she could not be out at that hour or any other, that they gave the orders and, since she stared unseeingly at them and didn’t say a word, their leader said that nobody made fun of him, not even God or Allah, and he had orders to shoot anything that moved, including dogs and cats. She left them, the corporal with his threats still in his mouth, and made her way to the river because it was midday and she had to go and watch her dead go by. The corporal bellowed again and his roars bounced off the walls of the houses and rushed into the terrified ears of the locals. Zorka ignored him and went on her way, dragging her feet and raising dust. The corporal cursed the heavens and spat the order to fire; the soldiers without a soul and without a god hesitated as they watched her moving away and some of them thought this can’t be, this can’t be, she’s a half-crazy old woman. The corporal repeated the order to fire, his voice hoarse with fury. Then one of the soldiers raised his rifle to his cheek, a magnificent FR50 that some lucky guy used before the war to hunt boars, marked the woman’s back with the crosshairs of its telescopic sights and fired. Zorka of Black House fell like a dropped bundle of clothes. The soldier, well pleased with his aim, went over, wonderingly observed her and then raised his head and shouted, "Look, I got her and she's still moving".

Mortally wounded, Zorka turned her face to the sky so her soul could leave more easily and breathed wearily. She felt no pain because her tears had dried up a long time ago. Then she looked at the solder square in the face, opened her eyes wide and held out her hand. The words she said were only understood by the stones because they came out with the first dollop of blood that was thick and black from so much suffering. And she thought, poor child, he’s lost another tooth because they don't look after him properly. The soldier was diverted by the dark splodge of blood and, still laughing, set the barrel of the rifle point-blank against Zorka’s forehead as the old woman desperately writhed, not with fear but because of wanting so much to be understood despite the dollop of blood. The shot blew her skull apart and the triumphant soldier happily bawled, "She's not moving now! That did it!"

And with his shirtsleeve he wiped away the slobber that ran from his mouth and went back to his detachment, without a family, without a soul, and his simpleton's smile.

Translated from Catalan by Julie Wark ©.