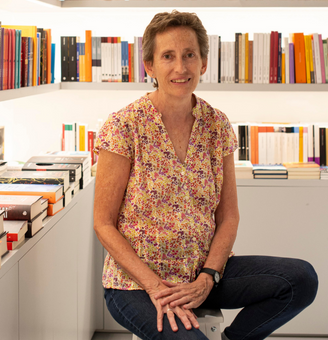 Laia de Ahumada (Barcelona, 1957), has a doctoral degree in Catalan Philology from the University of Barcelona. She combines philological research with spiritual writing in prose and poetry. She also teaches courses on writing ans spirituality. She is co-founder of the Centre Obert Heura for homeless people, and member of its board of directors since 1999.

She has been collaborating, since 2009, in the project "Topografía de la espiritualidad femenina en Cataluña y los Reinos Peninsulares" (HAR2008-02426/HIST) (Female Spirituality Topography in Catalonia and the Mainland Kingdoms), by the History Faculty from the University of Barcelona; and "Base de Dades de Manuscrits Catalans de l'Edat Moderna" (Database of Catalan Manuscripts from Modern Age), by the Institut d'Estudis Catalans.

As a writer, she began her literary career with a short story that won First Prize for Young People's Prose offered by the UEC Mataró Hiking Association (1974). Lately, she was awarded the first prize –ex aequo– in the Third Joan Gomis Memorial Awards for her article "Una casa comuna i compartida. Petita història del Centre Obert Heura" (A Shared House in Common: A Short History of the Centre Obert Heura). She published several articles and the books: A Cau d'orella. Teresa de Jesús llegida avui (Whispering: St. Therese of Jesus Read Today, 1996); Vull parlar de Déu (I Want to Speak of God, 2001); Paraules des del silenci (Words from Silence, 2005); Monges (Nuns, 2008) and Els noms de Déu (The Names of God, 2010). She is co-author, together with Teresa Forcades and Àngela Volpini, of Una nova imatge de Déu i de l'ésser humà (A New Image of God and the Human Being, 2012). Some of her poems have been published in the anthology Lluernes al celobert. Antologia de poesia espiritual femenina (Glow-worms in the Inner Court: An Anthology of Women's Spiritual Poetry, 2007).

She collaborates on a regular basis at the review Dialogal.