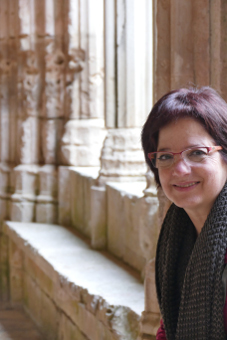 Blanca Busquets (Barcelona, 1961) is a writer, journalist and philologist.

Written word has marked her life. At the age of twelve she wrote her first story and, ever since then, writing has been the mainstay of her existence.

As well as participating in reading clubs, she has held talks, presentations and conferences throughout Catalonia, in various places in Spain, and in cities such as Alghero, Moscow, Leipzig or Berlin. He has participated in the book fair in Warsaw 2016 as part of the delegation of Catalan writers.

She has been working as a radio journalist at Catalunya Ràdio since 1986 and has produced several programmes. She also worked as a writer for the Catalan television station Televisió de Catalunya for seven years. She is a regular collaborator for the digital newspaper Osona.com and she participates in the "Head Writers" programme at the Lliçà de Vall public library.