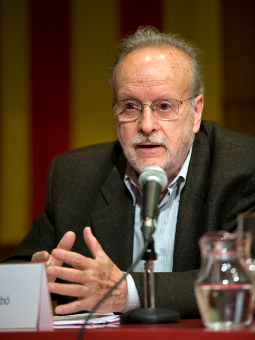 Joaquim Carbó was born in 1932 in Caldes de Malavella, his mother´s hometown, but he has since lived his entire life in Barcelona. As a boy he read anything printed on paper. He began a writing career at the close of the 1950s about the time Socialist Realism was coming to an end and he brought a dose of humor to this style. He has been connected with Cavall Fort since its first edition in 1961 and is a part of the editorial board of the magazine. He is deeply devoted to children´s and young people´s literature, which he writes alternately with stories and novels for adults (he has nearly 100 books to his name).

He is a founding member of Ofèlia Dracs, the writers collective. He coordinated the children's books program of the Congrés de Cultural Catalana in 1977. He is a member of PEN and is one of the first writers to join the Associació d´Escriptors en la Llengua Catalana (AELC). In 2002 he received the Jaume Fuster Memorial Prize for his life's work.

He is an honorary member of AELC (Association of Catalan Language Writers).