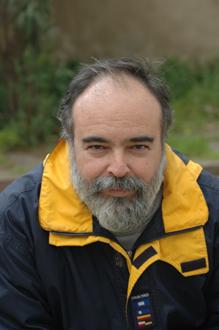 Josep Francesc Delgado Mercader (Barcelona, 1960). He grew up in Sitges, Mallorca, and Menorca. He has a vivid memory from his early life: "the sun that illuminated everything with its light and the blue immensity of the sea."

He began studying the history of Catalonian theatre, discovered a growing vocation for poetry at age 16, and pursued courses in economics. The latter pulled him away from his first love, to which he later returned as theatre critic for the publication Serra d'Or between 1982 and 1985.

In 1977 Delgado began his studies in Catalonian History and Philology at the Universitat Autónoma de Barcalona (Bellaterra), and also began his literary activities. Between 1979 and 1987 he wrote his first book of poetry, Autopista Púrpura (The Purple Highway) published by Editorial el Mall in 1988, and won the Amadeu Oller prize for dèbut poetry. Also during 1988 he won two prizes for short fiction: the Preterit Incert prize for historical narrative awarded by the magazine L'Avenç for The Blue Room, and the Al Vent-Solstici (Summer) Prize for Havies d'haver posat La Traviata (You Had to Have Played La Traviata), the first edition of which was published by Pont de Pedra de Girona and the second by Columna. This recognition spurred him to begin writing narratives in earnest and during the period 1987-1988 he wrote his first novel: Si puges Sagarmatha quan fumeja neu i vent) If You Climb Sagarmatha When It's Smoking Snow and Wind (published in Spanish as Voices of Everest), an adventure mystery set in the Himalayas and told through the letters of alpinists who participated in the first Catalonian expedition to the highest peak in the world. [This novel received the Joaquim Ruyra Prize in 1988 and had its twelfth Catalán edition in 1993. Three Spanish editions have been co-published by Ediciones SM in Spain and by Consejo Nacional para la Cultural y las Artes in Mexico. The Spanish editions are currently out of print.] His interest in space, the environment, and people of that region led him to travel there during various seasons. The fruits of these stays (1988, 1990 and 1992) were two of the most-published novels that have ever appeared in narrative collections for young adults: Sota el signe de Durga (Under the Sign of Dorge) (national prize for the best juvenile novel published between 1991 and 1993) and Nima the Sherpa, or the Search for an Errant Spirit (second prize international, Europe, 1993).

During this time he did not neglect his poetry and in 1991 he won the Marià Manent poetry prize for his unpublished Tree of Desire.

After his daughter's birth in 1994, he began writing specifically for children, beginning with the novel L'empaitagrills i la dona de la Lluna, (The Cricket Chaser and the Daughter of the Moon)(Editorial La Galera)(Guillem Xifré de Colonya Prize, 1993); the magic story El mussol Oriol i la lladre de las endevinalles (The Oriole Owl and the Guessing Game Thief (Editorial Teide, 1994)(third grade reading book adopted for Primary Education), El mag i l'Estrella (Star and the Magician (Editorial Edebé, Collection "Tucán" 1996; second edition 1999) and Per què els nens no tenen por de l'home del sac jove (Why the Children Are Not Afraid of the Young Man With a Sack (Editorial Baula-Edelvives, 1997); and the bestiary which was conceived to be like a book of riddles, Endevina, endevinaràs, quin animals seràs (Guess, Guess, Which Animal Would You Like Best?) (Editorial Columna, 1995).

A product of his work as an education professional (he is a secondary and high school professor at Santa Coloma de Gramenet in Barcelona and has labored in the area of teaching the Catalan language and hopefully improving the general linguistic competence of high school boys and girls and passing on his love of reading) is the text Escriure: pràctiques de llengua i literatura (Writing: Practices for Language and Literature (Teide, 1991, 1994), a teaching manual for Catalan language and literature geared towards high school seniors that includes methodology based on reading, imitating, transforming, and creating literary texts.

On another note, in the year 1980 he co-founded, with Carles Molins and Leandre Terol, the Association of Young Catalan Language Writers —AJELC— paralleling the already existing association for professional writers with the objective of gathering and disseminating the work of post-Franco generation writers who faced difficulties entering the publishing world.

Most recently, Mr. Delgado and his wife, Herminia Mas Marssenyac received the Josep Marià Folch i Torres Prize in December 1999 for their novel about the extinction of the Pyrenese brown bear, Ulledevellut (Black Eyes).