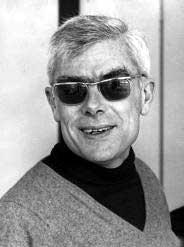 Gabriel Ferrater (Reus, 1922 - Sant Cugat del Vallès, 1972) was a writer and linguist. He produced some of the most significant poetic works in Catalan of the post-war period, with only three collections: Da nuces pueris (1960), Menja't una cama (Eat a Leg) in 1962, and Teoria dels cossos (Theory of Bodies) in 1966, which were then published as one volume Les dones i els dies (Women and Days) in 1968, this representing the final point of this extraordinary poetic adventure in the domain of Catalan letters.

Open eroticism and the passage of time are his constant themes. His poems "In memoriam" and "Poema inacabat" (Unfinished Poem) are amongst the most valuable testimonies concerning the Civil War and its consequences. A lecturer in linguistics and literary criticism at the University of Barcelona, he began to write a series of articles on linguistic doctrine in the review Serra d'Or (1969-72) under the title "De Causis linguae", outstanding amongst which is the draft of a metric theory based on the phonological component of the generative-transformational grammar proposed by Chomsky and Halle. He translated Kafka's The Trial into Catalan and also Bloomfield's Language and Chomsky's Cartesian Linguistics.