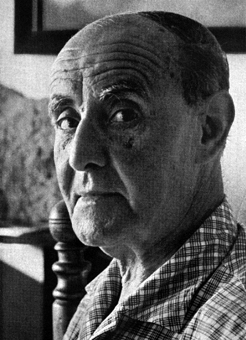 J. V. Foix (Barcelona, 1894 - 1987). A poet influenced by Noucentisme (the turn-of-the-century cultural and political movement in Catalonia) and fascinated by the vanguard movements, he defined himself as an "investigator in poetry". He began to publish before the Spanish Civil War, but recognition that he was a fine poet did not come until well into the 1950s. He incorporated troubador and mediaeval Italian poetry, along with surrealism and futurism into his cultural baggage. He wrote for the leading Catalan reviews and was an eminent proponent of the new vanguard arts, both literary and plastic. He published books of poetic prose such as Gertrudis (1927) and Krtu (1932), both of these highly influenced by surrealism. The Spanish civil war and the Franco regime put an end to his journalistic activities. Outstanding amongst his works in poetry are the book of sonnets Sol, i de dol (Alone, and in Mourning) (1947), On he deixat les claus (Where I Have Left the Keys) (1953), Desa aquests llibres al calaix de baix (Put These Books Away in the Bottom Drawer) (1964). In 1973 he was conceded the Award of Honour in Catalan Letters.

He was one of the first five members and also Honorary Member of the Associació d'Escriptors en Llengua Catalana (Association of Catalan Language Writers).