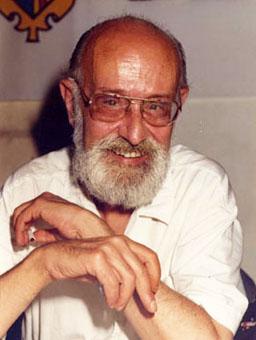 We Had Visitors on Sunday Afternoons

They left their coats on hangers
as if leaving there the skin of death itself,
scrawnily commonplace.
Mask well secured – the tragic
persona – they sowed the seed
of phonographic conversation
in the papery air
of the living room.
The record, slightly scratched, stumbled
now and then. Yawns opened;
the fans
snapped shut.
Uncle and aunt were there
and schoolgirl cousins.
The moth-eaten
light of dusk.
I, in the corner, all alone, not glaring
death rays, played
with tin soldiers.

(From Memòries i confessions d'un adolescent de casa bona (Memoirs and Confessions of a Well-bred Adolescent), 1974)

(From Urbanitat i cortesia (Urbanity and Courtesy), 1979)


Citizen am I of ductile territory,
inhabiting a sullen village of paralysed souls;
nameless dead live in me, exclamatory
tumult of sombre banners, phantoms full of holes.

Irate and insane, deceived sermoniser who cajoles,
I write the name in ivory and glue inflammatory:
chess board where take hold peremptory
anxieties, cravings and loud and ugly rigmaroles.

I am a worm damned, humbled behind the great
burning wave in the sea of slime and mud
cry in the night, despair of the wait,

and I move beyond the black and white flood,
soul within and raising the flag straight:
over the yellow are finger-stains of harsh blood.

Through small dark rooms of memory
cats-paw transit, clambering in the gaze
now gone astray the ash of yesterdays
and round the corners mews so much history.

Shadow challenges the attic, premonitory
of irremediable dismasted night, forays
of page-plucked calendar graze
autumn in every branch of pain, no trace of glory.

And I have been, and still I am, but no more fire
of me remains than useless lumber strewn,
a void cupped in the hands, commotion of prior

revels, buried, now lost in semi-swoon
on absent paths. Should one so require
it responds, frozen rose, muted moon.

The bells were silent for the opal of noon,
flowering on naked sarsaparilla lips:
dying of love I saw you.

The flame was hoisted through the heart of twilight,
deer moved away from the water's beautiful path:
dying of love I saw you.


The cry meandering without finding the moon,
night's claws lying in wait for easy prey:
dying of love I saw you.

And lofty solitude spinning the spider’s web
cut the diamond ridges of melancholy dawn:
dying of love I saw you.

(From La capella dels dolors i altres poemes (The Chapel of Sorrows and Other Poems), 1981)

I shall harm you, love; death's line
circles my lips, the soul would quail
from garlands of pain through the most hale
poppy of bad luck that to you I do assign.

I shall harm, you, love. Be firm of heart and spine,
for desire and disquiet, the furtive nail,
will rip the sensitive silk of the sail
that will never find the port to recline.

I shall harm you, love. Oh flee from me,
before I am vanquished by the flaming night
and bats on the old path make my way unfree.

Before evil fate bleeds the gaze white,
flee from me, love. Crossing destiny
are wings on the wind: prodigy of first light.

(From La capella dels dolors i altres poemes (The Chapel of Sorrows and Other Poems), 1981)

You wanted to say rain. To pronounce the cliché tribute to rain. All
that about gleaming asphalt, trickling canals, polished cobble-
stones. You wanted to say a yellow room, red-hot salamander stove and,
beyond the glass, the grey.

You wanted to write a concert for guitar, get on a red
double-decker bus; you wanted the grey and green not to
end, to enter your heart like a bit of cotton to adorn it. You
wanted to burst into tears. You wanted tea on the little table at five.

Now it's known; il pleure dans mon coeur comme il pleut sur la
ville. Emerald. A demand for needles in the skin. You wanted to walk
around corners with her laughing under the umbrella.

You wanted to describe this silk that falls apart in your fingers, learn
by heart the square root of three to fourteen decimal points. You
wanted her to embroider on a handkerchief this soft, honed intimacy.
You wanted the simplicity of leaving the umbrella in the umbrella stand.

You wanted the rain like a magnolia tree in the evening.