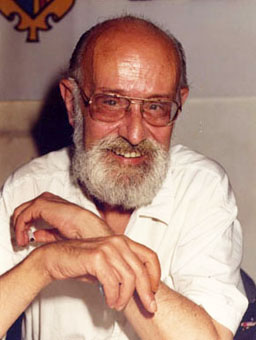 Josep Maria Llompart (Ciutat de Mallorca, 1925 - 1993) was an outstanding proponent of all types of activities in defence of the Catalan language in Mallorca –as a speaker in conferences, President of the Obra Cultural Balear, literary consultant, university teacher, etc.–. This facet as a public personality has at times overshadowed his poetic work which is of great intensity and quality, constantly moving between a quest in terms of formal elements and the creation of a rich and carefully-worked poetic universe revolving around the great thematic axes of Love, Death and Country. Moreover, Llompart was also a fine translator of poetry, principally of Galician-Portuguese works, and a literary essayist who also wrote about social matters.

In 1982 he was awarded the Premi d'Honor de les Lletres Catalanes (Award of Honour in Catalan Letters) and the Creu de Sant Jordi de la Generalitat de Catalunya (Saint George Cross of the Government of Catalonia).

He was president of the Associació d'Escriptors en Llengua Catalana from 1983 to 1987.