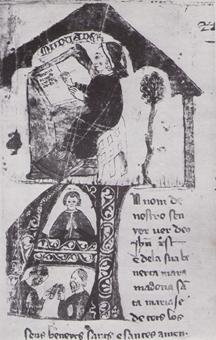 Most of what we now know of the life of Ramon Muntaner is thanks to the chronicles he wrote himself. At the tender age of nine he was acquainted with the kings Jaume I and Alfons X, who stayed in the house of his father, Joan Muntaner, a fact that would decisively mark his entire life. In 1285, when he was twenty years old, his home, like the rest of the town of his birth, was destroyed and burnt to the ground by French troops. He never returned to Perelada again but accompanied Roger de Llúria in the conquest of Menorca (1286 – 1287). Between 1287 and 1300 he lived in Mallorca and, in 1301, he went to Sicily to defend the city of Messina, while in 1302 he headed eastwards to Constantinople with the Catalan Company, which was commanded by Roger de Flor. In 1311 he married a lady from Valencia with whom he had two sons and a daughter. In 1315, he was put in charge of moving the infant and future king, Jaume (James) III of Mallorca from Catania to his grandparents in Perpignan. Years later, the latter, now king, would honour Ramon Muntaner with a knighthood.

In the years from 1325 to 1328 Ramon Muntaner wrote Crònica (Chronicle) at his farmhouse at L'Horta de València. This supreme work of medieval Catalan literature takes in the period from 1208 to 1328, which is to say the reigns of Jaume I (James I), Pere el Gran (Peter the Great), Alfons el Franc (Alfonso the Liberal), Jaume II (James II) and Alfons el Benigne (Alfonso the Benign). The work is outstanding for the high quality of its narrative, along with its continuous interaction with the readership to whom the story is addressed, its characteristic and oft-used resort of "What shall I say?" and his extolment of his native land and the monarchy.