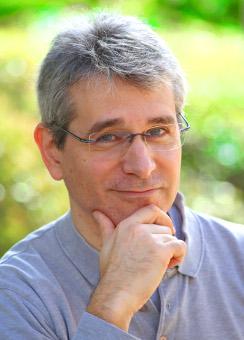 Jordi Ortiz i Casas (Barcelona, 1969) is a writer and qualified insurance mediator who opened his own office at a very early age.

Here, he has found time to produce his first literary works, starting out in the domain of crime novels with Crim a les Àligues (1998) and El segrest de Barcelona (2000). After this inicial sortie, he diversified his production. Nigra (2002), is a science-fiction novel to which the publishing house Castellnou now devotes a whole chapter of a secondary school text book. In 2005 he published a book of short stories Moros, negres i altres forasters (2005).

He has also published several children's and teenager's books, outstanding amongst which is the series Talpirons i ratolents (2005), which begins with a book of this title and presently consists of four titles. In 2010 he was the winner of the Antoni Bru Prize of the City of Elx for his short-story collection Essència de guaiaba (2011) and, in 2011, of the Mallorca Prize for Young People's Fiction for his In absentia [Judici a la Terra] (2012). In 2013 he was awarded the Contarella Children's Prize from Ciutadella de Menorca for Bublub, el peix que no sabia nedar (2014), in 2014 the Ciutat d'Olot Prize for the Young People's novel Doble identitat (2015) and, in 2015, he received the Young People'ns narrative Prize Nit Literària de Sant Jordi of Perpinyà (Perpignan) for the story Gota d'aigua, as well as the Carlemany Prize for Reading Promotion for Vorejant els límits (2016).