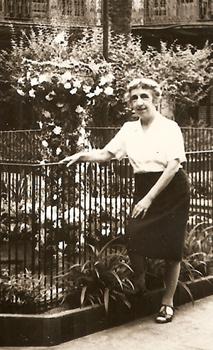 Maria Teresa Vernet (Barcelona 1907-1974) was a novelist, translator and poet.

From a very early age, she showed that she was a literary woman of great sensibility. She published poems and short stories in a range of Catalan periodical publications before the Civil War, for example Art Novell and D'Ací i d'Allà. Her first novel, Maria Dolors, was published when she was nineteen, the year that the publishing house "La Novel·la d'Ara" offered its Prize for the Novel for the second time. In 1927 she published Amor silenciosa (Silent Love) and, in 1929, Eulàlia was published by Proa, of which the director was then Joan Puig i Ferreter. This was the start of a very productive relationship with this publishing house.

Her career as a novelist reached its zenith in 1934 when she received the Joan Crexells Prize for Les algues roges (Red Seaweed), the main characters of which were women grappling with moral dilemmas, as was the case with most of her books. These were novels constructed around the themes of the conflict between ideal love and passionate love, mother-daughter relations, sexuality and female social models. After the Civil War, Maria Teresa Vernet abandoned her previously abundant creative work, declining to re-publish her work and only publishing the occasional story in El Pont and Tele-Estel. Thenceforth she worked as a translator and, after 1965, she translated authors like Graham Greene, Frank Swinnerton, James Joyce and Aldous Huxley, whose collection of short fiction, Two or Three Graces, she had translated in 1934.

Although her public appearances were rare, she made a major cultural contribution at the Club Femení i d'Esports (Women’s and Sports Club), working with the writer Anna Murià.