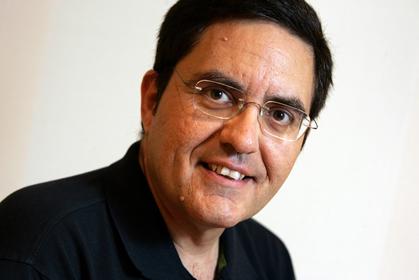 Joan Maria Bigas (Barcelona, 1961), is an engineer and writer. He is a member of the significant group of writers who combine literature with their work in the scientific or technical fields. There is a certain presence of scientific and artistic elements in his work. A homage to art and architecture is the leitmotiv of his book Tan lluny de Roma (So Far from Rome, 2007). The analisis of a special historical moment in Barcelona and the origins of Ildefons Cerdà's urban planning is the driving force of the novel A terra les muralles! (Tear Down the Walls!, 2012).

Among this elements, Bigas explores in great depth the world of human relations, the way human behaviour changes when a person is alone or in society, and the limits of artistic creation. Between the description of atmospheres and characters, Bigas enjoys combining what is true and what is merely apparent, while raising crucial issues like brilliance and mediocrity, the ambiguity of memory, ambition, the desire to be important and the limits of artistic creation. The pace of his writing and well-founded structures are the basis of Bigas style, which evokes a constant confrontation between racional and irracional, chronicle and literary fiction.

He begun his literary career with the novel Recorda en Barné (Barné Remembers, 1999) an endeavour that aims to combine science and literature in a collection to this effect. His second work, Tan lluny de Roma (So Far from Rome, 2007), is set in the mythical Rome of the paparazzi and the actors that move in Via Veneto, and introduces the reader into a fascinating tour of Italian art and architecture which become, along with human memory and the obsessive presence of Rome as a stage setting, the unquestionable stars of the book. Five years later Bigas published A terra les muralles! (Tear Down the Walls!, 2012), a historical novel which narrates the adventures of Ildefons Cerdà and Ferdinand de Lesseps during the bombing of Barcelona in 1842.

Joan Maria Bigas was recently trained as a playwright at the Obrador form Sala Becket in Barcelona and at the Sociedad General de Autores (SGAE), with the professors Esteve Soler and Paco Zarzoso. He is a member of the Associació d'Escriptors en Llengua Catalana (Association of Catalan Language Writers).